Microtia is a congenital deformity resulting in an abnormally small, malformed or absent external ear. One in 8000–10,000 children are born with microtia every year. The cause of microtia is still unknown. It is important to know as a parent that there is nothing that you could have done differently during your pregnancy that would have changed your child’s condition.

Can my child hear? Will this affect my child’s speech development?

Most children with microtia do have hearing loss in the affected ear because often there is no canal to transmit sound waves to the inner ear. This is called aural atresia. Children with microtia and atresia affecting one ear will have problems locating the direction of sound and have trouble hearing a conversation in noisy environments, but the need for a hearing device is controversial. When your child begins school, you should make sure you child has preferential seating that will enable them to hear the teacher best. If your child has microtia with hearing loss on both sides, it is important to improve your child’s hearing with a bone-conducting hearing aid such as BAHA. It should be fitted before the age 6 months. The sounds that babies hear in the first year of life are very important for speech and language development.

If your child has been born with one-sided microtia, you may not notice their hearing impairment until they get older. As they age, they will naturally develop habits to compensate for their poor hearing on one side. Microtia treatment with Dr. John Reinisch can give your child the ability to hear properly out of both ears.
Want to Learn More? Visit Our Video Gallery

Is there a surgery to improve my child’s hearing?

There is a surgical procedure that involves making an ear canal and an eardrum called an atresia repair or canalplasty. A CT scan of the middle ear should be done at 2½ years old to determine if your child is a candidate for the surgery. Most microtia patients have normal inner ears, and therefore, approximately 60% of children with aural atresia can have significantly improved hearing from a canal and ear drum reconstruction. This type of microtia treatment can be done when your child is at least 3 years of age or older. 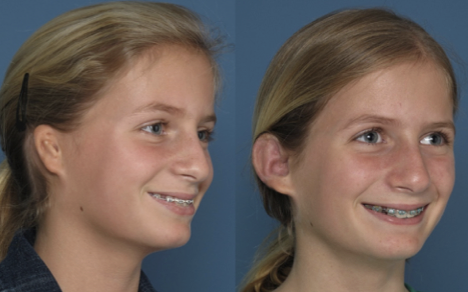 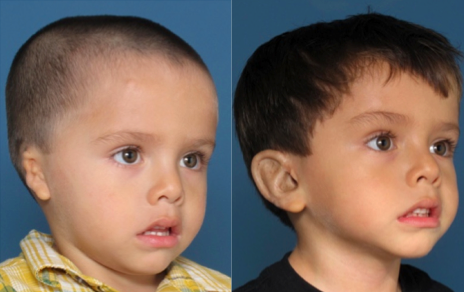 Can Microtia be associated with other conditions or symptoms?

The most common condition in which microtia is seen is Hemifacial Microsomia, in which half the face does not grow in proportion to the other. The degree of hemifacial microsomia varies from barely perceptible to very noticeable. Treacher Collins Syndrome involves both ears and also affects the eyes which appear to have a downward slant or “pulled down appearance.” The cheek bones are small and the eyelids and jaw are affected. Goldenhar Syndrome may involves one or both ears and is characterized by incomplete development of ear, nose, soft palate, lip, and jaw as well as potential benign tumors of the eve.

What treatments are available for my child’s microtia?

There are 3 types of treatments for microtia:

A prosthetic ear can be created to look very similar to a patient’s normal ear. The specialist who can make and color the prosthesis is called a prostodontist. There are two methods that are used to attach the ear prostheses. One uses a glue to adhere the ear to the skin. The second method uses titanium implants which are placed onto the bone around the ear. The prosthesis can then be “snapped” into place (called an osteo-integrated prosthesis.)

Using a child’s rib cartilage to carve an ear framework has been the standard of care for more than 50 years. Cartilage reconstruction is an invasive technique that requires between 2–5 surgeries. Ear reconstruction with rib cartilage must be delayed is old enough to have sufficient cartilage to make an adult-sized ear, typically between 7–10 years of age. First the cartilage from several ribs is removed through an incision on the child’s chest The cartilage is carved and pieced together to create an ear framework. This framework is buried under the scalp and after the ear has healed, more surgeries are required to complete the reconstruction: elevating the ear away from the scalp, repositioning the earlobe and other adjustments.

First introduced in 1991 by Dr. John Reinisch, MEDPOR® is a surgical technique that uses a porous polyethylene framework along with the child’s own tissue to create an ear. Dr. Reinsich has further innovated a technique with minimal scarring. Reconstruction with MEDPOR® can usually begin at age 3. If only one ear is involved, the MEDPOR® framwork is customized to match the normal ear, but is created slightly larger so the ear will be adult-sized. The framework is then covered by the patient’s own tissue (called a flap) which is brought down a s a thin “living membrane” from underneath the scalp. In most cases, only one surgery is required to reconstruct the ear. Atresia repair can be done before or after MEDPOR®. A combined one stage reconstruction of both microtia and canal surgery using MEDPOR® is possible. 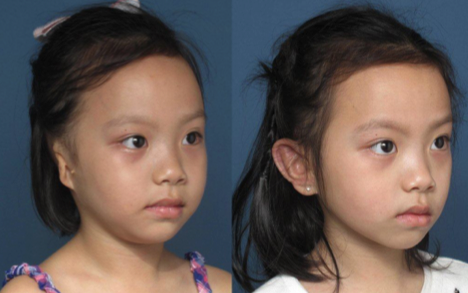 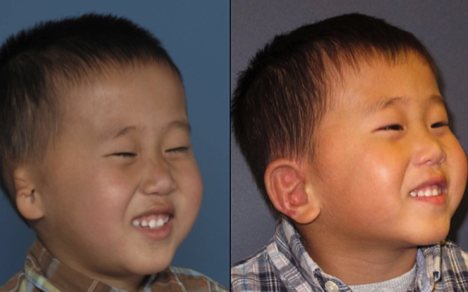